The controversial Bush Doctrine that became a political football over the last several campaigns now seems to be a part of Obama’s strategy in dealing with the possibility that the Syria regime used chemical weapons against its own people. The “Bush Doctrine” was first used by Charles Krauthammer in June 2001 to describe the Bush administration’s “unilaterally withdrawing from the ABM treaty and rejecting the Kyoto protocol.” Several months later (after September 11, 2001) it become a regular part of the political vernacular as the Bush administration took actions on its own, without the agreement of international organizations or allies, to preemptively “protect” the American people.

Presidential candidate Barack Obama has long been critical of this policy. He said in 2008 that “The president does not have power under the Constitution to unilaterally authorize a military attack in a situation that does not involve stopping an actual or imminent threat to the nation.” He goes on to say,

“As Commander-in-Chief, the president does have a duty to protect and defend the United States. In instances of self-defense, the president would be within his constitutional authority to act before advising Congress or seeking its consent. History has shown us time and again, however, that military action is most successful when it is authorized and supported by the legislative branch. It is always preferable to have the informed consent of Congress prior to any military action.”

Candidate Obama was perfectly clear — unless danger is imminent, the Congress must be consulted in the action. Yet, in an interview just this week on PBS, President Obama seems to be significantly modifying his perspective, and one can even hear the echoes of Bush’s controversial “Doctrine” in his speech.

Gwen Ifill of PBS stated to the president early in the interview,

“For the American people who look at this (the situation in Syrian) and say, why are we getting involved, how do you justify taking action? I know you talked about international norms because of chemical weapon use, but not because of the 100,000 people who were killed there in the past, and the 2 million refugees who fled across the border.”

“Well, what’s happened has been heartbreaking, but when you start talking about chemical weapons in a country that has the largest stockpile of chemical weapons in the world, where over time, their control over chemical weapons may erode, where they’re allied to known terrorist organizations that, in the past, have targeted the United States, then there is a prospect, a possibility, in which chemical weapons that can have devastating effects could be directed at us. And we want to make sure that that does not happen.”

Not only is Obama alluding to the Bush Doctrine, he is stating one of its cornerstone principles, which essentially states that “we have to attack the enemy that may, some day, have the potential to attack us.” The United States, its people, and its resources could become exhausted if we combatively…(read more)

Kevin Price recently interviewed Rajat Paharia, the man who coined the term “Gamification,” on his show, the Price of Business, on Business Talk 1110 AM KTEK.  He also wrote about Paharia in his column in the Huffington Post.  Here is an excerpt of that article:

We are now living our lives online – community, entertainment, work, finances – virtually everything we do — by technology and throwing off reams of data (big data) about our activity. Smart companies are feeding this user-activity data into gamification systems which use data-driven motivational techniques to power engagement, high-value activity, and ultimately, to create loyalty.

Gamification in the technology realm is relatively new, but the concept is really quite old. For years companies, like McDonalds have used games (such as Monopoly at the Golden Arches) to increase engagement and (hopefully) loyalty. One can argue that coupons are a form of gamification and those are about as old as retail and grocery stores. One of the “innovations” that former JC Penny CEO, Ron Johnson brought to the company was the end of coupons (making pricing “real”). This “bold move” almost finished the retailer off. The engagement had been reduced, the opportunity to “play the game” of saving had evaporated. So did the store’s profits.

Loyalty 3.0: How to Revolutionize Customer and Employee Engagement with Big Data and Gamification (McGraw-Hill Professional; June, 2013; HC, $27.00) attempts to reveal, according to a statement from the publisher, “how to combine this big data with the latest understanding of human motivation to power gamification – the data-driven motivational techniques used by game designers to stimulate engagement, participation, and activity.”

Author Rajat Paharia is known as a pioneer in the business use of big data. He is also known for coining the term “gamification.” His company, Bunchball, was one of…(read more)

Small businesses make up half of the GDP of the U.S. However, the country’s confidence is at historic lows. Adding new hires is risky, regulations are burdensome, and few want to make substantial financial commitments to growth that may never materialize. Across the country, smaller companies have begun to rely increasingly on outsourced labor — not only for the mundane call center and computer programming functions, but also for higher level strategic guidance. The Boston-based HourlyNerd is one such company that is exploiting this trend. 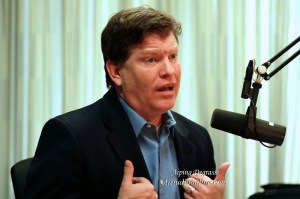 This group of young entrepreneurs are overflowing with confidence and their assessment of the company and its future abounds with optimism.

Founded in February of 2013 for a class project by a team of Harvard Business School students, HourlyNerd pairs top-quality MBAs with small businesses to provide, what they describe as “low-priced, flexible consulting, financial and accounting advice by the hour.” Since starting earlier this year they have “seen more than 300 businesses register for their site and have signed up more than 875 MBAs,” according to a statement. Example projects have included (among others) market entry analysis, business plan creations, and financial modeling; the Nerds also say they are on the verge of launching a co-marketing agreement with a top global technology firm. “We delight our customers because we offer them exceptional value. Our ‘Nerds’ cost about $35-50/hour. It’s very difficult to find freelancers for under $100-150, and honestly, the quality cannot compare. And McKinsey and Bain & Co. are obviously way too expensive for these businesses.” says founder and co-CEO Rob Biederman, age 26.