Revealing Article on the Business Side of CNN

Being in media, I like to check out our industry’s rags.  Today, I have done something I have done for many years, seen a story that should be a broken record to any competitor of the Fox News Network.  Here’s the article and its headline from TV Newser, which is a newsletter of Mediabistro:

“Fox News Channel has just finished the second quarter of 2103 as the #1 cable news network for 46 straight quarters. But while boasting 9 of the top 10 shows on cable news among younger viewers, FNC had its lowest weekday primetime performance in the A25-54 demo, in more than 12 years. Which may be why the network is planning changes to primetime…

In primetime, total viewership grew +5%, but the network lost -11% of the younger viewer audience it had drawn at the same point in 2012.”

You would think that after a decade of getting its derriere handed to it by Fox News it would consider doing something about it.  CNN is in…(read more)

Kevin will be speaking at the Windsor Club, which is one of the oldest Networking Clubs in Houston, Texas.  He will be speaking on September 19th at 7:30 am. His topic will be “What the Changes in Media means to Business.” 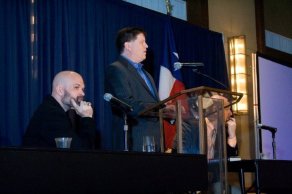 Also, on Thursday, November 14th, at 7.30 am, Kevin will be speaking at the Heights Chamber of Commerce in Houston, TX. You can learn more about the Chamber at HeightsChamber.com.

Kevin is a popular speaker that does dozens of presentations a year, with media as it relates to business being one of his hot topics, but he has many others. When Kevin speaks, those events are promoted on the  Price of Business Show and US Daily Review.

Want Kevin to speak to your next event? Email producer@USABusinessRadio.com.